After a recent power bill reminded me that Servers were not free to run, but rather pulled some rather big power costs behind them, I decided to downsize.

My initial Plan involved selling 3 of my 1366-era servers and keeping the R410 as sole VM host. This brought it’s own headaches, like having to deal with moronic eBay buyers and manually having to fiddle with the partition table since it was a partition in a partition (don’t ask)…

So anyways, after having sold the three space-heaters, and having moved everything to the R410, I quickly realized something: This thing is loud as fuck.

I however didn’t have the money to go for something more quiet, like a DL360e G8 or similar. So I started looking at colo….

A few days later I asked my boss if we had some space left in our Colo, and if I could use 1u of that. We rent a quarter rack locally to use, with IWB in their BSL1 Datacenter. After having explained to him, why I, a normal IT Tech, has his own private servers, he accepted my request.

This meant I had to order rails, somehow squeeze 2 SSDs into an R410 and make sure I have a colleague to install it with.

Since this server has lived in my mildly-dusty room for a good year, and I don’t have a compressor at home, I used this opportunity to clean the Server. 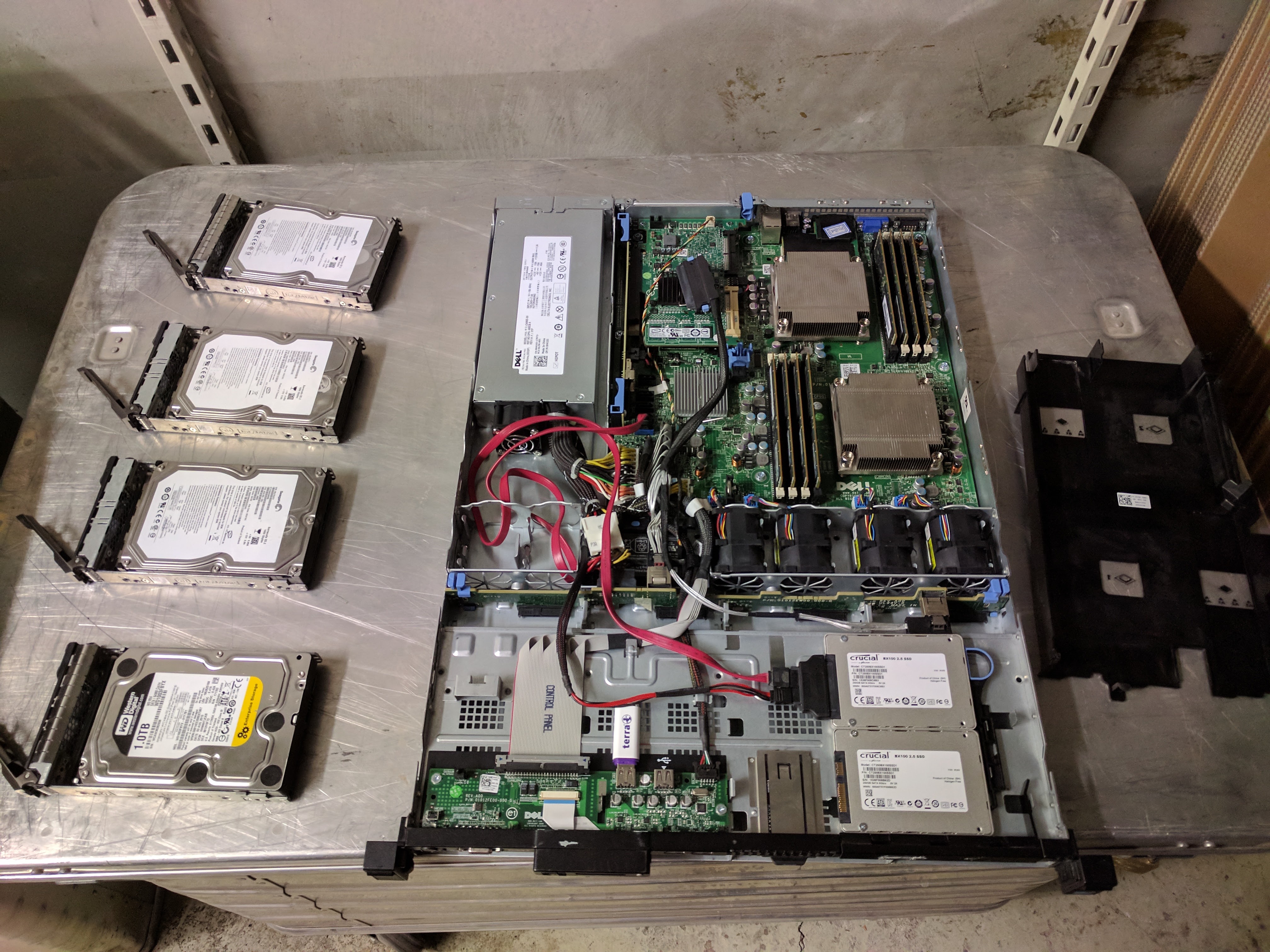 This should improve temperatures by a little, while also keeping the Color Rack dust-free.

Rails were pretty easy to find on eBay, however they were sadly 70€ with shipping. There were a few auctions at the time, but since I didn’t want to have an extra wait and potentially spend more money, I just bit the bullet and forked out the 70.

Pretty early after having fully migrated to the R410 I noticed that IOPS were atrocious with the local HDD Raid 10. I did have 2 Crucial 250 GB SSDs laying on hand, which I used to use with iSCSI. My First plan was to just a Slimline Optical to HDD adapter, but I couldn’t find mine and dint’t want to buy another one.

After playing around with a few other plans, I decided to get this, which converts the slimline SATA Power to normal SATA Power. This would be enough for one SSD. Shortly after having gotten the adapter though, I realized that 250 GB of Flash weren’t going to cut it…

The R410 however only has one spare power connector, so I had to get creative. One SATA Power to Molex and one Molex to double SATA Adapter later, I had 2 SSDs running in my R410. These fit pretty fairly in the space where the optical drive would be (I only had to remove a few metal studs).

The End Results looks as following: 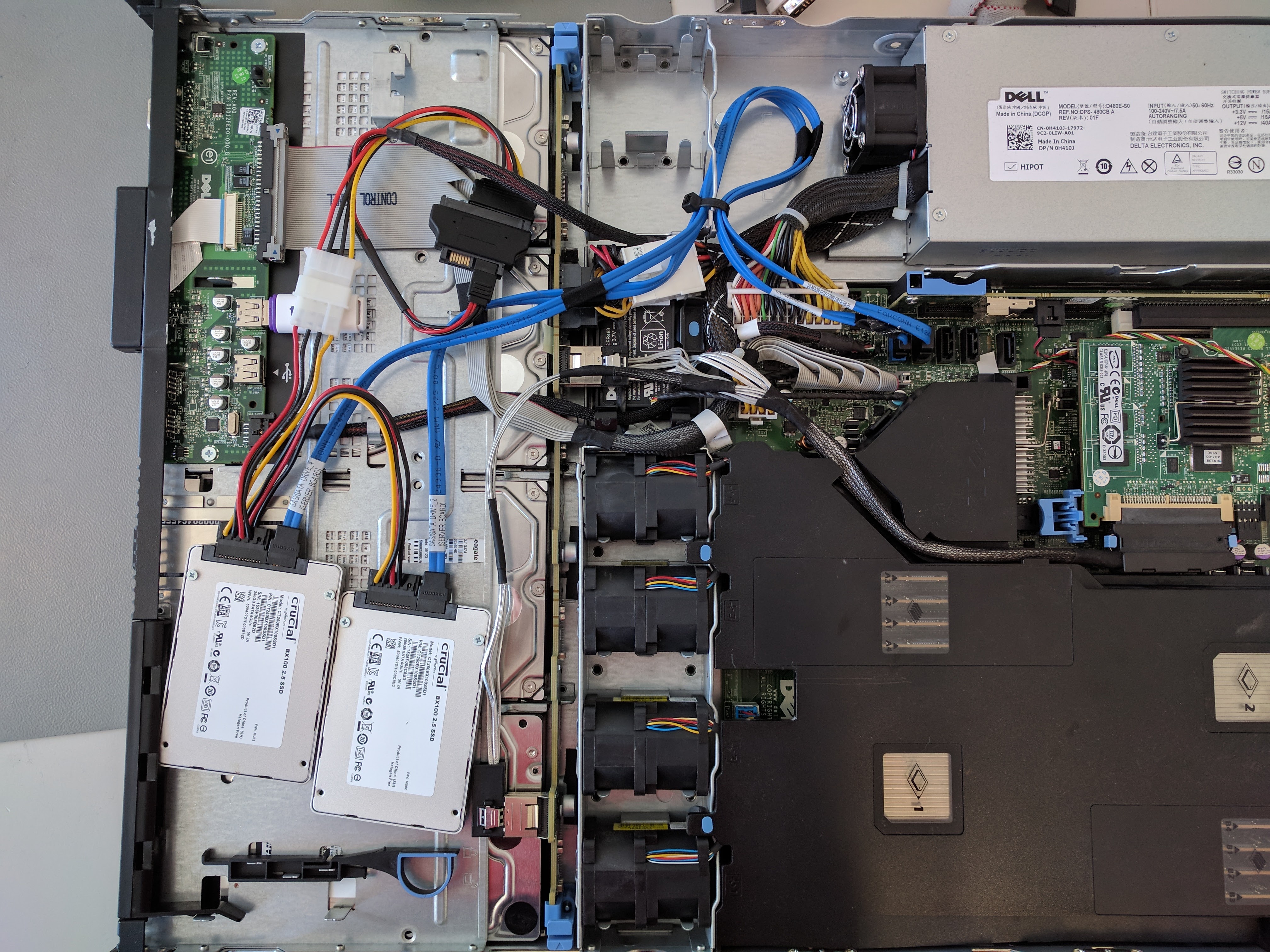 I wanted my Server to be ready for the installation, so I installed a VyOS VM to do my Routing/Firewalling/NATing. The network as a whole is setup in the following way: 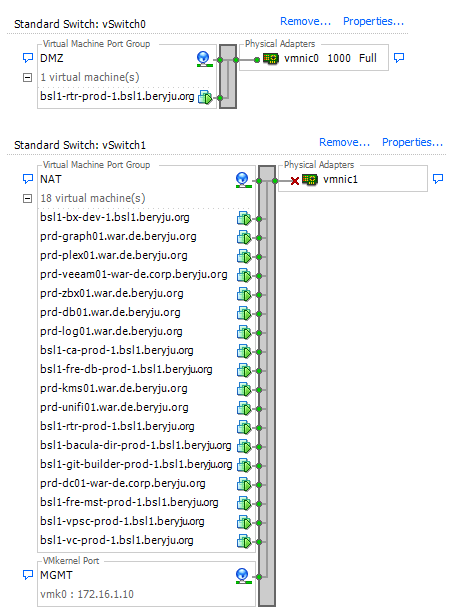 After making sure the VyOS VM can connected to the internet, to my VPN and integrated into my BGP network, I also had to assign the iDRAC a static IP. This was a very controversial step, however I chose to do so to be completely independent from other systems. I could have hooked it up to one of our work servers and tunneled everything through there, but I wanted my server to interface as little as possible with actual work servers.

After the rails finally arrived, I had to wait for a chance to actually go to the datacenter. I don’t drive, and I reaaally didn’t want to carry a 1u Server across Basel. Luckily, when I asked one of my colleagues about it, he mentioned that one of our work servers was installed without rails. It was laying on top of two servers for ff3l.net. We ordered rails for all three servers, and scheduled an appointment to install them. 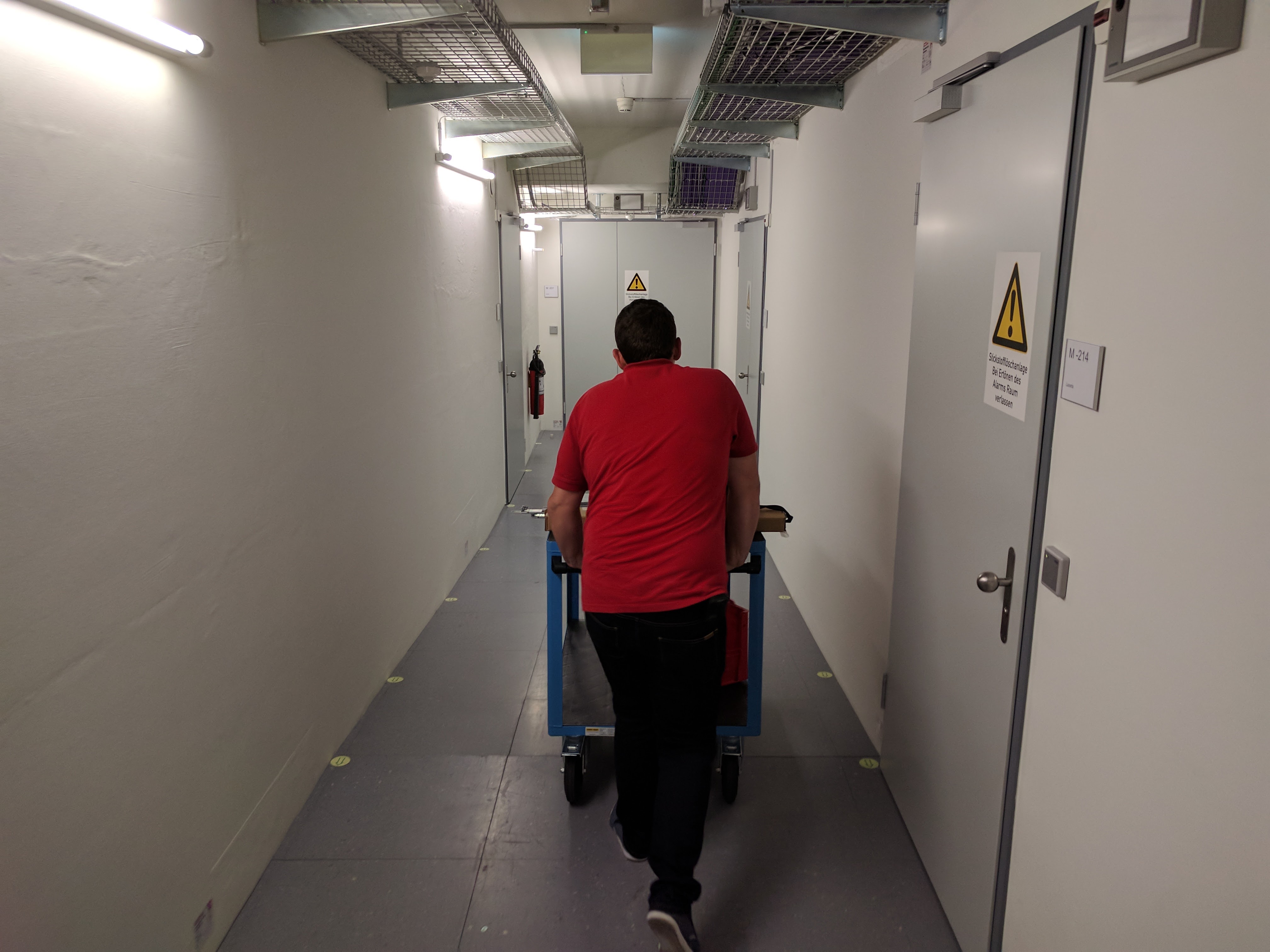 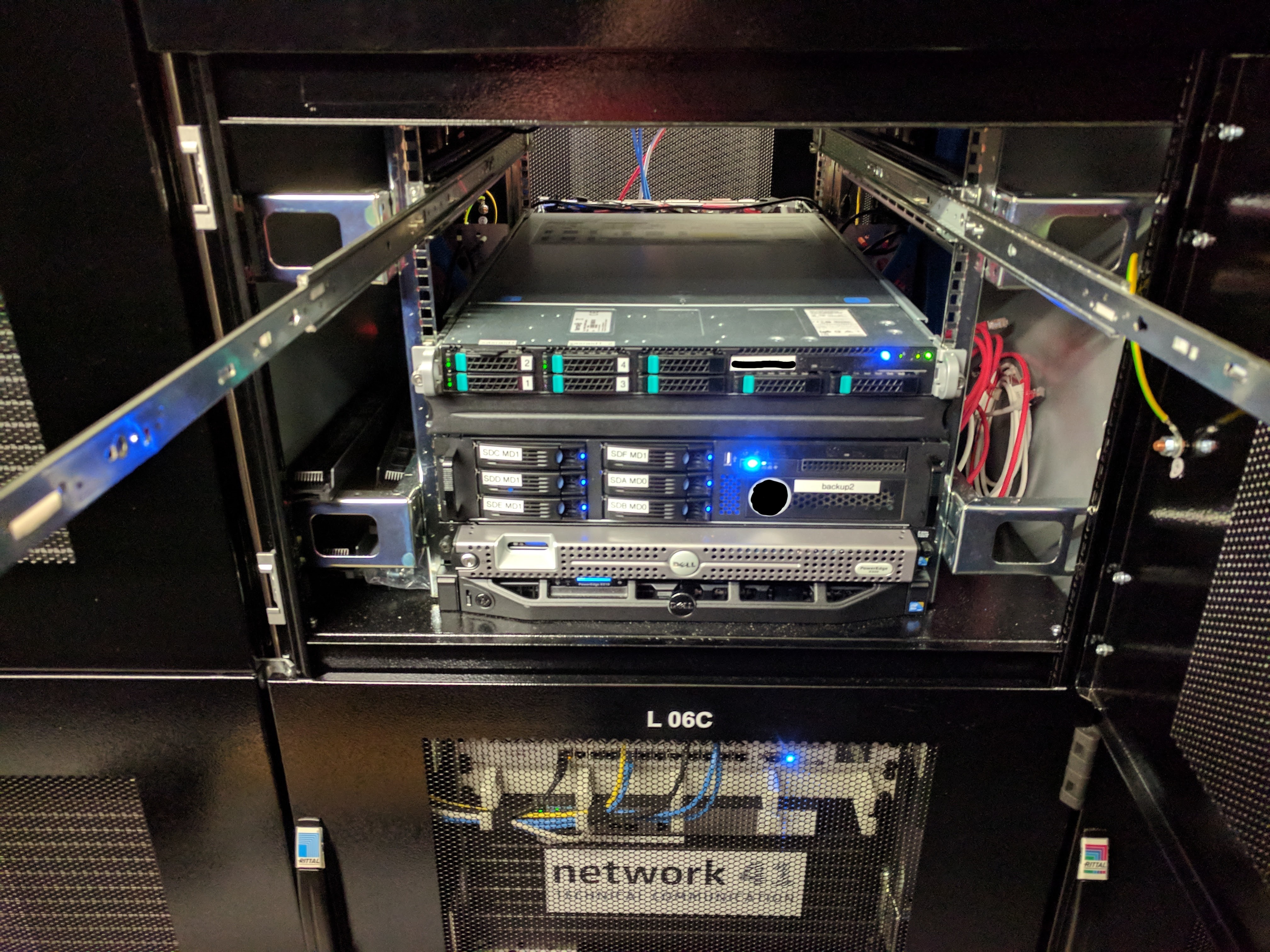 Luckily I didn’t have to install the Server on my own, because even though Dell’s Rails are pretty easy, it was a pain.

Setup after the install was pretty easy too, I just had to assign my VyOS box the static IP, assign both ports on the work router to the correct bridge, and everything connected.

The End-End Result after installing the server and setting everything up looks like this: 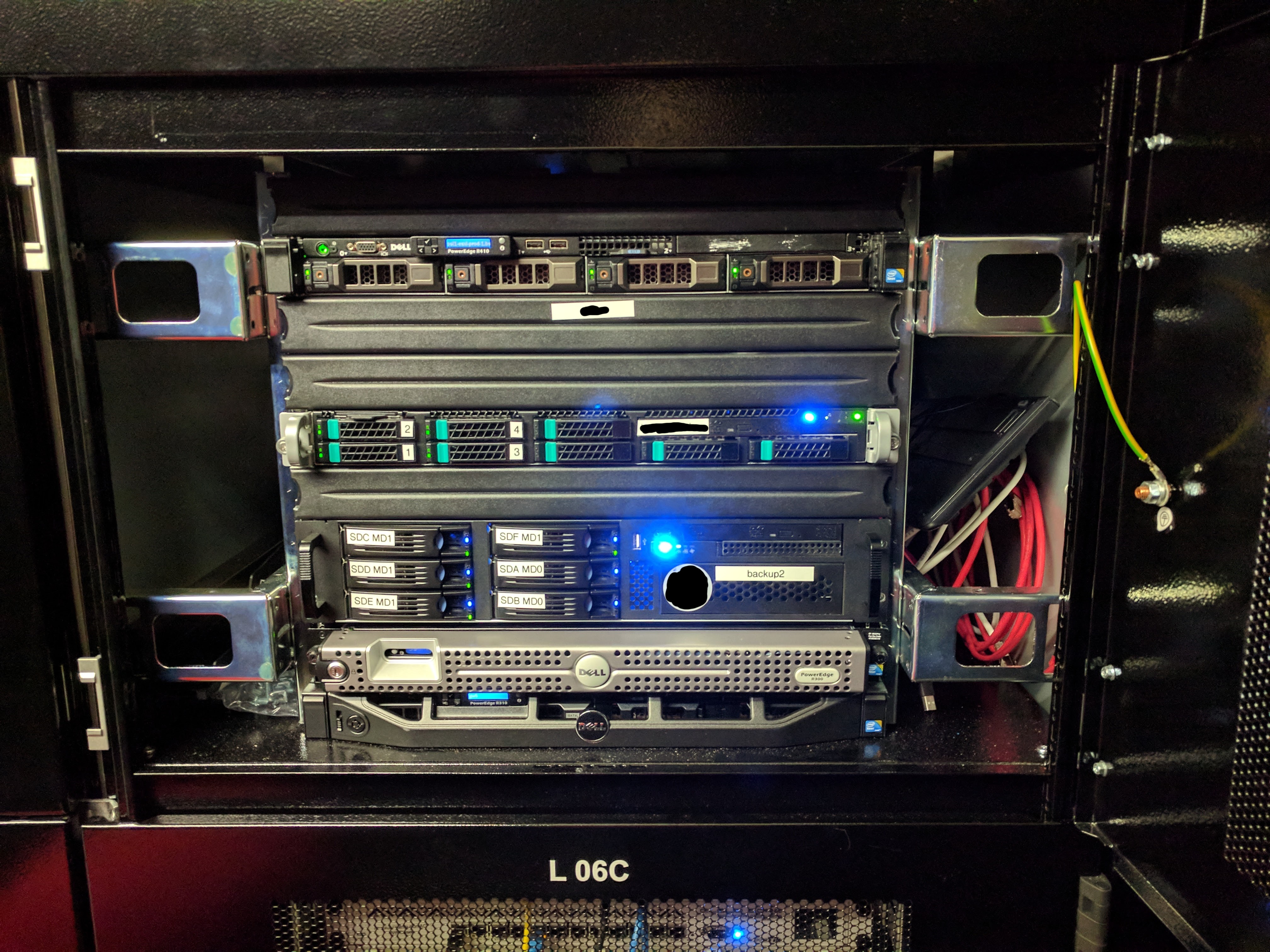 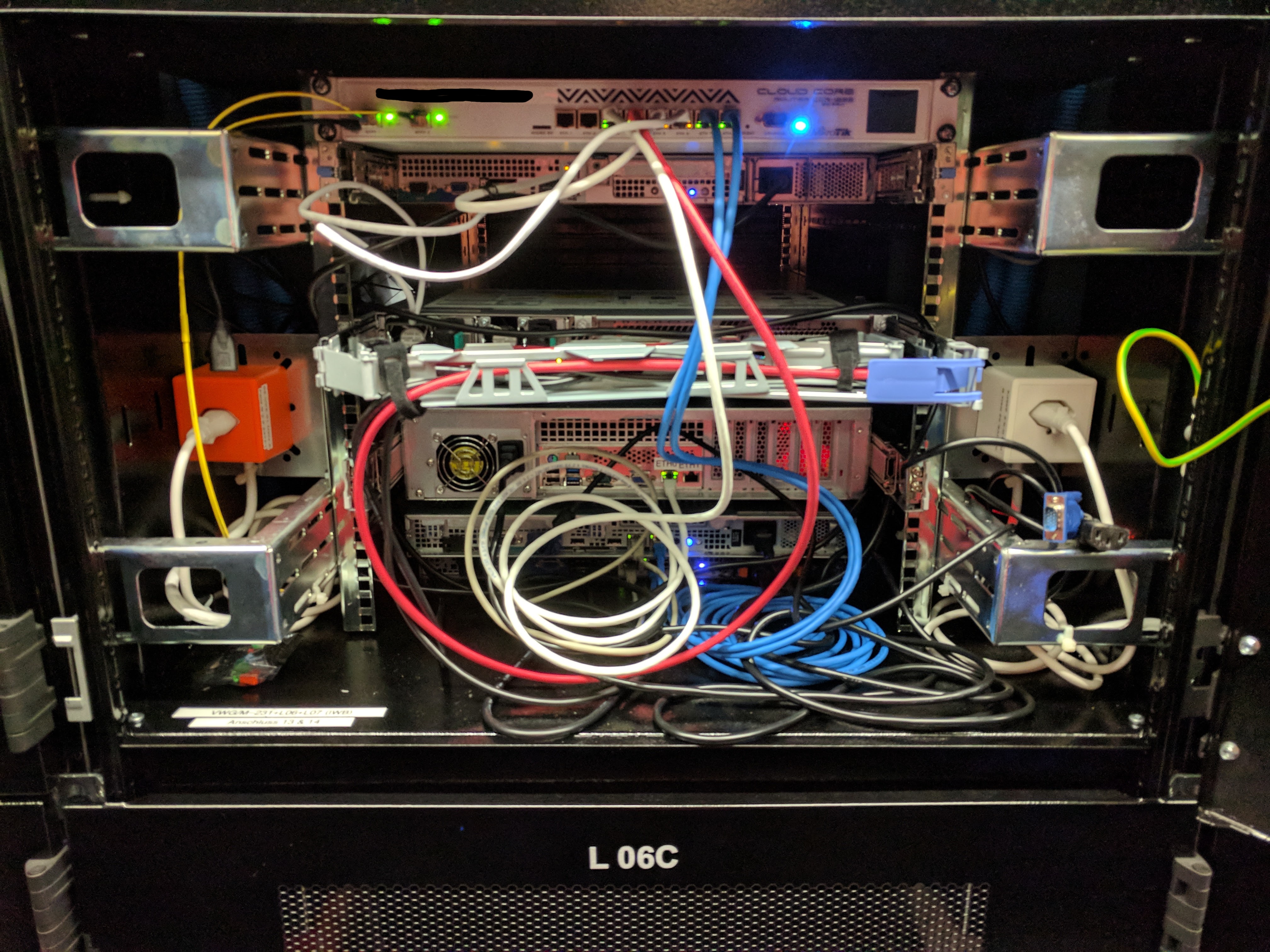 And of course, the speeds are great too:

So no more on-site Servers, Jens? #

My original Plan for home, now named BSL3, was to get an E5-2xxx Tower Server, with a bunch of HDD Bays, and replace my fileserver with it. This would be quiet enough and also draw little enough power to be sustainable.

Anything newer than 1366 is still really expensive in Europe, and with my apprentice salary an ML350e G8 wasn’t gonna happen anytime soon.

I did however switch to VyOS installed on an old Atom Nettop, just so I have VPN and BGP on the same box as my main Gateway.

Installed ESXi on it, set up a Foreman proxy and it’s now going to host my few on-site VMs (Plex, DC and Foreman Proxy).

This should be enough for me until I move out, at which point I will probably get a brand new HP or Dell Tower server.

Read other posts
← IPv6 and online.net My Thoughts about Puppet 4 →